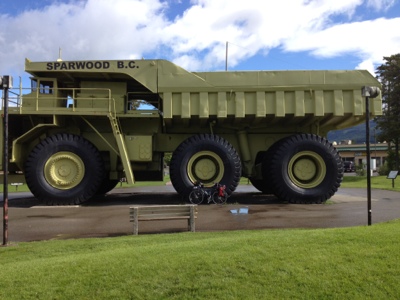 I left Fernie at 8am on Canada Day, July 1 under cloudy conditions and a light rain shower. It rained for the first 25km. After 30km I stopped at the Sparwood BC visitor centre to look at the world’s largest dump truck, the 350 ton Terex Titan. In 1978 the truck was brought to Sparwood from California to work at a local coal mine. It arrived by train on 8 rail flat cars and was reassembled by the side of Highway 3 and driven to the mine site. The box is capable of holding 2 Greyhound buses and 2 pickup trucks. The truck was retired in 1990 as it was no longer cost effective to operate. 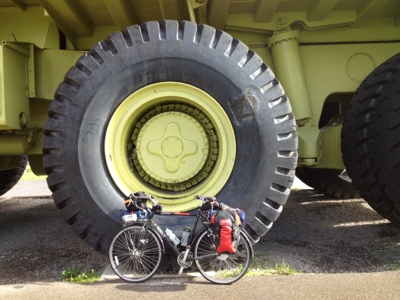 After Sparwood I continued on my way and had a long climb to the top of Crowsnest Pass. When I reached the top of the pass the sun broke through the clouds and it turned in to a great day. I had a long descent through several small communities. About 30 km from Pincher Creek I turned of Highway 3 on to the much quieter Highway 507. There were a few long hills to climb for the first 10km but after that life got much better. For most of the last 20km to Pincher Creek I travelled downhill on new smooth pavement with the wind at my back. It was great.